This is the future that can save US. But, I am not certain you must be an Independent. 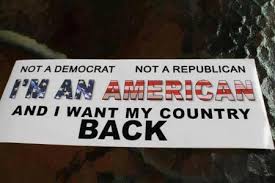 Independent voters never really have had a strong party structure, since they never wanted to be associated with Democrats or Republicans.  They have always stayed away from being labeled a party, intentionally or not, which allowed them to vote for anyone they wished.  Independents did not have to vote for a particular “independent” backed candidate.   It is difficult to win an election when everyone goes off in their own direction.   However, isn’t that what being an independent is all about, “do what you wanna do”?

If independents band together somehow as in a convention and choose a candidate, are they no longer independents?   I suppose you can call your group (party….ugh) by any name you wish.   This is my opinion, I don’t believe the Tea Party was/is an independent party/group/organization.   They are Republicans for the most part, that have been labeled extremist nuts and…

First, I blogged on blogger, then Myspace - soon I was consistently ranked. Next, I quit. Then the blogging addiction came back .... Comments are appreciated. Not nice comments are edited. You can follow me at the top right.
View all posts by Wayne →
This entry was posted in Uncategorized. Bookmark the permalink.